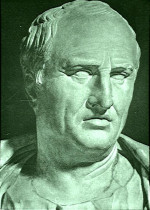 "Objection Your Honor! Attorney Cicero Is Mischaracterizing the Testimony!

My title for this article may be melodramatic for effect, but it is essentially the theme of Boris Nikolsky's article "Epicurus On Pleasure" available here in our Files Section. The effect I am hoping for is only this: that all fans of Epicurus who want to understand the meaning of the term "ataraxia" read this article in full. The article is thorough and well-documented, and in turn it is based on the even more though "The Greeks on Pleasure" by Gosling & Taylor. I hope I have now stirred your appetite and convinced you that the time you invest will be well spent.

Most of us have been raised on a steady diet of articles and books that claim that there is a profound difference between "katastematic/static" pleasure and "kinetic/active" pleasure, and that this distinction was of central importance to Epicurus. The express or implied reasoning then carries forward to allege that Epicurus valued katastematic/static pleasure above all, and that this hard-to-define state constitutes a state of "ataraxia" which is the single goal of Epicurean living. More detail about this follows in this post, with much more in the article, but for now the thumbnail version is that the distinction appears to have originated with Antiochus of Ascalon, who applied a framework known as the divisio Carneadea in his reasoning about the philosophy of pleasure.

Nikolsky's primary purpose is to demolish this argument that this distinction was of any relevance to Epicurus, and to show that Epicurus taught a unified theory of pleasure as ordinarily understood, with ataraxia and aponia being simply terms describing the manner in which those ordinary mental and physical pleasures are enjoyed. I contend that Nikolsky succeeds devastatingly and effectively.

"Epicurus On Pleasure" marshals the evidence to show the division of pleasure into "kinetic" and "katestematic" categories was not a part of true Epicurean doctrine, leading inexorably to the conclusion the entire structure of modern mainstream commentary about the meaning of "ataraxia" is simply wrong.

Nikolsky illustrates how this false kinetic / katastematic distinction infiltrated modern Epicurean literature by following the procedure we all need to follow: comparing conflicting sources against each other. In this post I will trace his argument in an attempt to whet your thirst to read the full article.

First, Nikolsky points out a series of glaring problems that arise if we accept the allegation that the division of pleasure into "static" and "kinetic" categories was important to Epicurus, stating:

"Besides all these problems and contradictions there is yet another, quite remarkable fact. As it happens, most sources make no mention whatever of any differentiation between kinetic and static pleasures but rather convey Epicurus' doctrine in such a way as to suggest that pleasure was to him a unified and unambiguous concept. This group comprises sources that are rightly considered to be the most reliable: these are texts by Epicurus himself, as well as by Lucretius and Plutarch. On the other side, besides Cicero, only Diogenes Laertius and Athenaeus mention two kinds of pleasure."

"I therefore believe that the problem of kinetic and static pleasure needs to be further examined. The way to do this that seems to me the most reasonable is first to describe the Epicurean concept of pleasure on the basis of only one group of sources (i.e., Epicurus, Lucretius and Plutarch) which are the most reliable and only then to make use of the information contained in texts by Cicero, Diogenes Laertius and Athenaeus. Since Cicero'sreport differs substantially from everything we find in the extant texts of Epicurus himself, supported by Lucretius and Plutarch, it would only be natural to put less trust in Cicero. On the other hand, even in this case the evidence by Cicero, Diogenes and Athenaeus should not be rejected simply as erroneous without trying to establish the reason for this error. This is exactly how I am going to structure my study: first, I will address myself to texts by Epicurus, then I will compare Cicero's, Diogenes's and Athenaeus' reports with them, and finally I will search for an explanation of discrepancies between these two groups of texts."

Nikolsky then follows the evidence to this conclusion:

"[T]he state of 'freedom from pain' turns out to be the effect of some external forces and is inseparable from those positive sensory pleasures which are conventionally classified as kinetic."

"At least two contexts enable us to assume that, from Epicurus' point of view, a state of ataraxia, i.e., a state unconnected with the impact of an external force cannot be regarded as pleasure at all. [emphasis added] The first one is the above-cited fragment from Lucretius explaining why atoms are not capable of suffering and enjoying: they do not comprise smaller particles and therefore are not capable of responding to the action of an external force. The second example concerns man. It is generally assumed that (for the Epicureans) a person experiences pleasure through all of his organs at all times when he is not suffering. That this is not exactly the case is demonstrated by one remark made by Lucretius regarding pleasure in the organs of taste. According to Lucretius, when the juices of the food that we consume are in the mouth, it is the palate that derives pleasure, and when they pass through the throat and move on down into the stomach, there is no longer any pleasure in the palate."

From my point of view, ataraxia in Epicurus does not at all denote any specific state; rather, he uses this concept to describe any pleasure. [emphasis added] In developing his doctrine, Epicurus had to respond to the Academic criticism of hedonism based, among other things, on the following argument: if pleasure consists in the satisfaction of desires, while the result of being satisfied is a neutral state and not a pleasure, then hedonists should provoke desires and avoid their complete satisfaction, making themselves like someone compelled night and day to fill leaky casks; their desires prove to be insatiable and the satisfaction of these desires has no limit. To protect himself from such criticism, Epicurus had to set a limit on desires and pleasures, and he regarded the absence of pain as such a limit; however, he viewed the absence of pain not as a special neutral state the Academics considered it to be, but as a characteristic giving sense to any pleasure and determining its magnitude. In Epicurus' opinion, the magnitude of pleasure reaches its limit in the removal of all pain." For example, plain fare gives as much pleasure as a costly diet, when once the pain of want has been removed, while bread and water confer the highest possible pleasure when they are brought to hungry lips. When we are having a rest, the magnitude of pleasure that we are feeling does not depend on whether we are doing this on a plebeian rug or on exquisitely patterned carpets."

In my view, all the facts examined above testify that the Epicurean concept of pleasure differs from the way it is represented in Cicero and Diogenes Laertius. Epicurus is far from seeing pleasure in a neutral state - a state in which both pain and usual, positive kind of pleasure are absent. Nor does Epicurus have all those contradictions of which Cicero accuses him and which are related to the division of pleasures into kinetic and static ones. One gets the impression that Cicero and Diogenes try to impose this division on Epicurus, reading it into phrases the actual meaning of which is absolutely different: Diogenes finds it in a sentence which is in fact dealing with the physical and emotional side of any pleasure, and Cicero, in his turn, infers it from the two characteristics of pleasure - as the absence of pain and as a pleasant movement perceived by the senses.

Nikolsky concludes his article by showing that Cicero and Diogenes Laertius likely came up with this kinetic / katestematic distinction because they were viewing Epicurus from the perspective of a classification of philosophies that came from another source, and not from Epicurus:

[I]t should be noted that in comparing Epicurus' and the Cyrenaics' ideas Cicero proceeds from a description of various ethic doctrines that goes back to Carneades and is related to Carneades' division of theories of the supreme good (divisio Carneadea): using the classification principle 'thesis- antithesis-synthesis', the author of this division contraposed the definitions of the supreme good as pleasure in motion, as the absence of pain, and Epicurus' view which he believed to synthesize both of these concepts. Probably, Cicero received this view of Epicurus' concept of pleasure through Antiochus of Ascalon, who, as Cicero himself reported, had often used the divisio Carneadea in his reasoning.

No doubt this article and its conclusions are very challenging to those who have accepted the modern mainstream view that the Epicurean goal of life is fully contained in the untranslated word "ataraxia." I urge everyone who follows that view to read this article with an open mind and consider that their terminology may quite possibly need revision.

There is one alpha and omega in Epicurean philosophy, and only one: PLEASURE.

Read the full article with an open mind. I think you'll find it persuasive on its own, but if you want more, check out the most thorough single reference work on the development of pleasure in Greek philosophy: Gosling & Taylor's "The Greeks On Pleasure." For my personal summary of quotes and references for the issues involved, see my "Full Cup / Fullness of Pleasure Model" article.

Please make all comments in the Forum thread associated with this article.